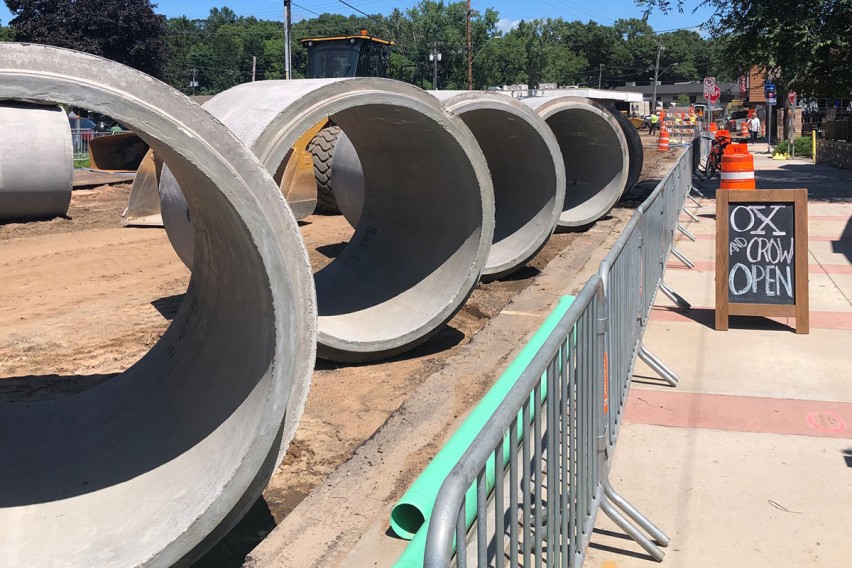 Mahtomedi, MN, is nestled between urban Saint Paul and the city’s rural outskirts. Considered a ‘small-town-city’ by its residents, Mahtomedi is a busy municipality for its population of just over 8,000 people. Stillwater Road, which runs through the community’s business district, serves nearly 10,000 vehicles per day. The road is a significant east-west corridor for local and regional travel. The roadway connects several cities and essential community resources, including the Mahtomedi High School and Middle School, Wildwood Elementary School, the Mahtomedi Fire Station, Wildwood Library, as well as commercial and residential property.

In 2016, Stillwater Road was a patchwork of cracked asphalt from years of heavy traffic. Also, it was clear to the community that several intersections with four-way stop signs were not enough to manage the traffic along the route. Later that year, Washington County conducted a study and received community input to develop project goals, concepts, needs, and desired outcomes. The key considerations included updating the roadway with ADA and pedestrian routes, increasing safety, enhancing parking, improving public and private utilities, and dealing with the increased traffic demands from the community’s growth.

The original plans called for the removal of fifty-year-old precast pipe and replacement with a precast arch system to increase stormwater drainage capacity. However, project managers were concerned that specifying a local supplier’s arch system – because it’s manufactured with a wet-cast process - would slow down construction. The wet-cast process requires additional curing time compared to a dry-cast process used by County Materials Corporation to produce elliptical concrete pipe. Representatives from County Materials met with project engineers and explained how elliptical concrete pipe would meet the same standards and performance requirements and overcome the project’s challenges, while being able to be produced five times faster.

Project engineers knew that arch units could be produced at a pace of approximately one or two per day. County Materials told them to expect their production schedule to be closer to  ten elliptical pipe units each day. Also, County Materials’ elliptical pipe is available with gasketed joints, an industry preferred option in stormwater management projects.

Elliptical pipe was an ideal solution for this project because site conditions required a shallow stormwater management system. Mahtomedi sits on a high-water table, so the contractor could not excavate as deep as a typical storm water project utilizing round pipe. Additionally, there were several underground utility lines, including a 12” gas line, located under the pipe run. Elliptical pipe overcame these obstacles because its oblong shape allows for a shallow trench height while providing hydraulic efficiencies for high storm water flow capacities. In addition, elliptical concrete pipe handles loading with minimal embodiment support. County Materials’ project coordinators worked directly with the contractor to determine proper grading for the elliptical pipe installation.

"Successful planning, communication, and execution was made possible on this job thanks to the County Materials team," said Jeremy Kuechle, Vice President and Safety Manager for Kuechle Underground. "We have a strong relationship with County Materials because we know we can trust them as a leading supplier in the region."

The project also required fifteen manholes with monolithic bases ranging in size from 96” to 120”. County Materials produced the high integrity monolithic base structures that added strength in the shallow depths.

County Materials began deliveries in early July 2019. Each delivery was on time, worked around the contractor’s schedule, and was safe and quick. Only a month later, the contractor was pouring sidewalks and curbs, and by mid-August, the business district of Mahtomedi had freshly paved roads and was re-opened to traffic. By November, most of the project was completed with only final touch ups left, which are expected to resume in spring 2020. 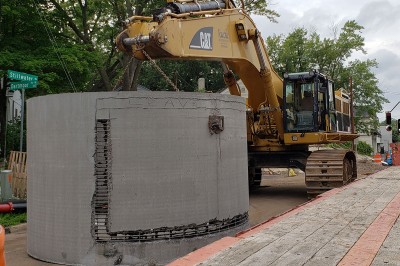 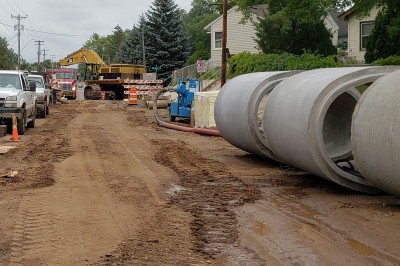 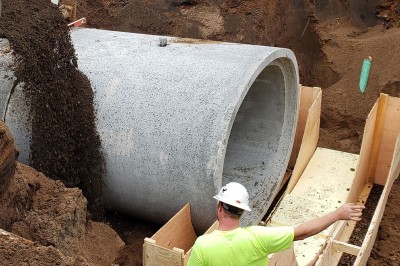 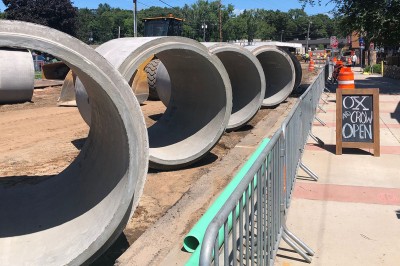 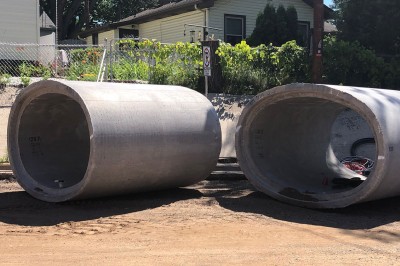 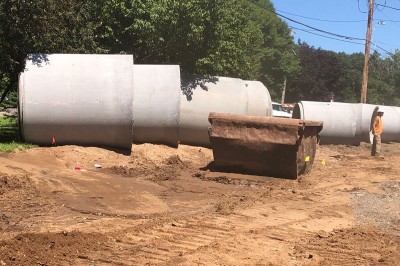