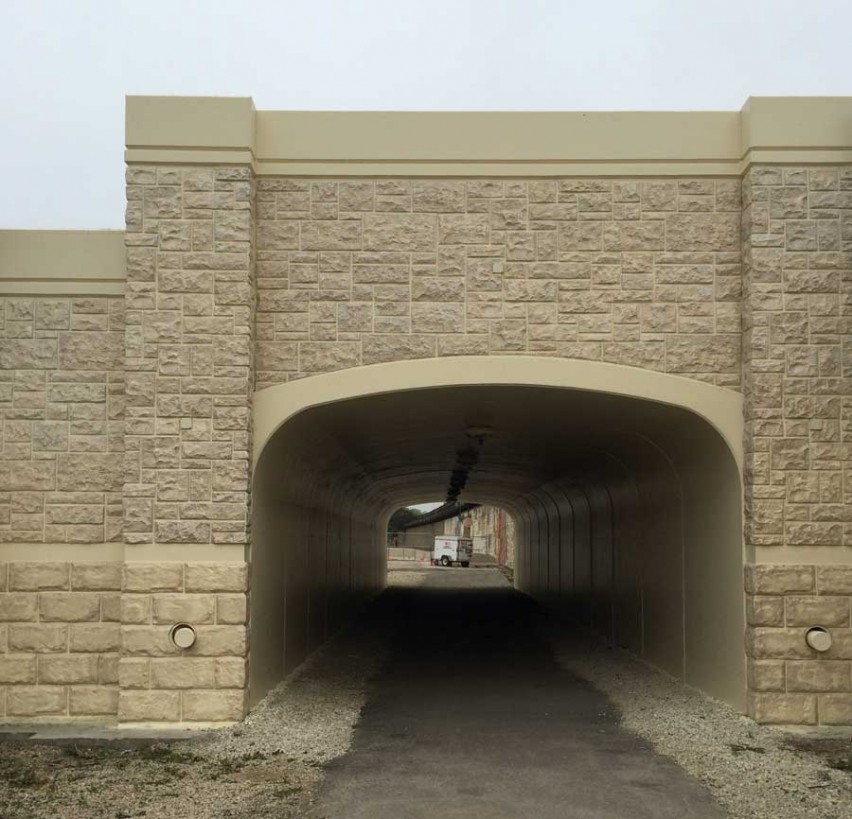 Located in the southwest corner of the greater Chicago area, Joliet, IL is end of the line for two routes of the Metra, Chicago’s commuter train system.  Between them, the Heritage Corridor and the Rock Island District lines transport 1,400 passengers each day to and from Joliet Union Station. The City of Joliet is currently upgrading the area around its downtown train station into a multi-modal regional transportation center. The project will reduce conflicts between passenger and freight train traffic, and improve overall safety and aesthetics in the area.

One important goal of the project is to improve pedestrian traffic flow and safety. This requires that commuters have safe and convenient access to station platforms from nearby parking areas.

The largest parking area is located across the tracks from the station. A railway underpass provides road access to and from the station. Until recently, pedestrians had to share this space with vehicular traffic. In addition, the 104-year-old structure supporting the tracks was showing serious deterioration to the point of being unsafe. To address these issues, and to accommodate upgrades to the train tracks and platforms, it was decided to replace the existing bridge, transforming the underpass to a pedestrian-only tunnel. Ideally, this would be done using a construction method that would not interfere with the twice-daily rush of commuter pedestrian traffic.

County Materials Corporation in Salem, IL, was called upon to manufacturer ARCHCAST® structures. The arched, precast concrete bridge sections are allowing construction of the new passageway without disturbing the existing bridge structure. The arched shape is also well suited to the aesthetic requirements of the project.

Bridge reconstruction began in October, 2014. To create the 96’ tunnel, twelve 8’ long ARCHCAST structures weighing 48,000 pounds apiece– each with a 16’ span and 11’ rise - were pulled under the existing passageway with the aid of Hillman rollers and a winch. C-shaped channels built on the concrete footing guided the rollers to ensure smooth placement of the sections. Care was taken to ensure that the footing was level so that the weight of the structures would bear evenly on the four rollers.

In addition to designing and manufacturing the ARCHCAST structures, County Materials provided support during this first phase of the project. “We weren’t directly responsible for the installation,” says County Materials project manager Rich Cooper, “but we’ve pulled pieces in before so we worked with the contractor (Ragnar Benson Construction) to help make sure it all went smoothly.”

Once the tunnel was in place, precast head and wing walls were installed to finish the ends. County Materials’ production team used a formliner to give the surfaces of these retaining wall units the elegant look of a stone wall. The surface of the units will be stained a warm tone once the concrete is fully cured. The stone wall appearance adds an architectural element to the project that will help it integrate visually with other aspects of the project renovation as well as existing structures.

The third phase of the project involves pumping controlled low strength fill into the space between the existing abutment walls and the new arch walls. The mix contains largely sand bound with a small amount of cement. It flows well, does not require compaction, and reaches around 500 PSI within 28 days. It is very hard for structural strength, but can be excavated. Once this is filled in and cured, the final phase will involve tearing out the existing bridge, filling with ballast, and reinstalling the tracks. The project is expected to be completed in June, 2015.

By installing the ARCHCAST structures, Joliet commuters have been able to safely access Joliet Union Station from the parking lot throughout the construction process. In addition, they will be greeted with an aesthically pleasing structure on their way to and from work for decades to come. 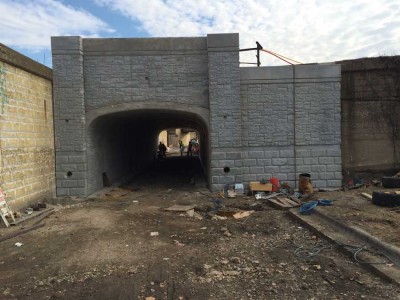 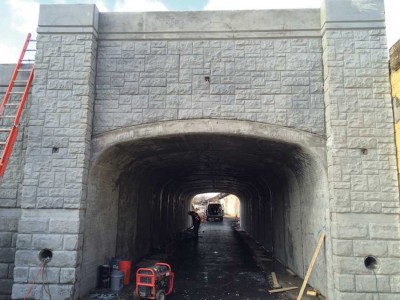