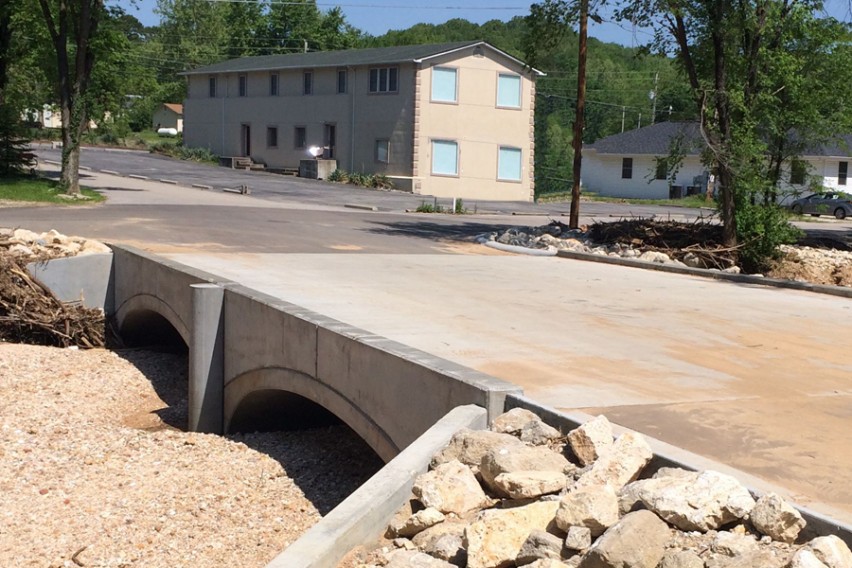 After a devastating flood hit the city of Waynesville, Missouri, city officials knew there was significant work to be done, including vital infrastructure upgrades to prevent another disaster. In all, the flood damaged nearly 100 homes and businesses in the small town. Reports indicated at least seven inches of rain fell on the area causing the Roubidoux creek running through the town to reach a record 21-foot crest after only having about one foot of water before the storm.

One of the infrastructure upgrades was the replacement of a low-water crossing structure which connected a city street to a main thoroughfare. The original low-water crossing dammed a branch of the Roubidoux creek for decades, increasing the likelihood and intensity of flooding. Because of the significant impact floods had on the region; state and federal agencies, including the Missouri State Emergency Management Agency (SEMA) and the Federal Emergency Management Agency (FEMA), coordinated recovery and infrastructure upgrades for the project.

The replacement bridge was constructed with ArchCast™, a precast concrete bridge system manufactured by County Materials Corporation. The city selected County Materials’ ArchCast bridge system for its highly durable and straightforward three-sided design. County Materials manufactures the system and delivers the product to the site ready for quick installation. Additionally, because of budget constraints, city officials decided the best option for saving costs was to build the bridge using their crews, without hiring any outside contractor.

“The Dyer Street Bridge was a great ‘do it yourself’ project for the City of Waynesville,” said Bruce Harrill, City Administrator. “Working with County Materials and their knowledgeable technical personnel they provided to the site allowed our city crews to use the modular ArchCast design to construct the much-needed bridge while saving the city hundreds of thousands in construction costs.”

After the city crews completed the footings, County Materials delivered the precast units to the site. Once the arch units were in place, precast head and wingwalls were installed to complete the bridge. The convenient modular design allowed city crews to erect the bridge in only three days.

The creek has since begun to reshape the natural stream bottom after the September 2016 completion. City Mayor Luge Hardman praised all who were involved with the upgrades to the city by saying, “this was an amazing project for a small city, and we were able to do it with the help of SEMA, FEMA, County Materials and our city construction crews. ArchCast saved the city thousands of dollars.” She added, “with the building of the Dyer Street Bridge, we are proud to say the city has no low-water crossings remaining and is better prepared to meet future water levels.” 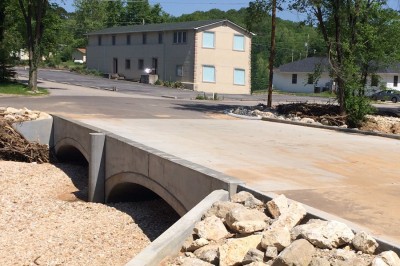 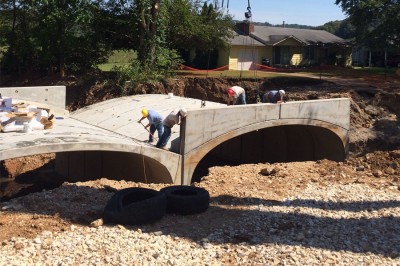 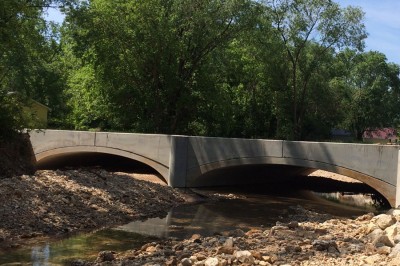 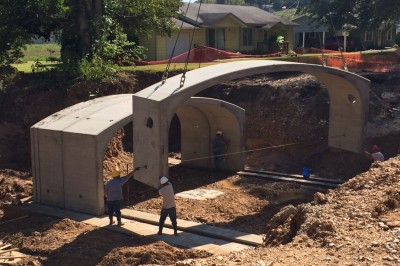