The City of Waukesha Wis. teamed up with Waukesha County and the Wisconsin Department of Transportation (WisDOT) to address concerns about increasing local and regional traffic volumes along the west side of the city. The lack of a major road connecting Interstate 94 and Highway 59 led motorists to use several smaller streets in the area for their commute, causing frequent traffic jams and unsafe conditions for drivers. In 2009 the City of Waukesha, Waukesha County, and WisDOT signed a Memorandum of Understanding detailing how the three entities would work together to tackle the large effort of building a bypass for the area. Throughout the next six years the city, county, and state developed the West Waukesha Bypass Study, which considered 11 alternative routes to determine the one with the least amount of environmental and residential impacts.

In 2015 the three agencies released a final Record of Decision detailing their plan to design and build a four-lane bypass with a raised median along most of the length of Merrill Hills Road and Meadowbrook Road. The project is made up of three construction contracts split up between the city, county, and WisDOT, each with a separate section. The city was responsible for a three-quarter mile stretch from Rolling Ridge Drive to North View Road. The County was responsible for the 1.3-mile stretch from Northview Road to US Highway 18/Summit Avenue, and WisDOT was responsible for the largest expanse, totaling 5 miles, from US Highway 18/Summit Avenue to Highway 59.

The mammoth project not only brought three levels of government together, it also required three of County Materials pipe manufacturing locations to supply massive amounts of precast concrete materials for fundamental flood mitigation structures on the city and county portion of the project, and culverts for several creeks and tributaries that flow under the bypass in areas constructed by the county and WisDOT.

Throughout the bypass planning stages, the design changed several times to meet the many environmental and residential concerns. The changes prevented material orders from going out until just three weeks before construction was set to begin. The project’s contractor sent County Materials project plans and a signed order on May 23, 2017, leaving it in the hands of County Materials to create structure drawings detailing special designs, get approval from the contractor and engineer, then start production before the projected start date for construction on June 12, 2017.

By the week’s end, dedicated team members from County Materials completed structure drawings for the early stages of the project and submitted them back to the contractor and engineer for approval. The rest of the plans were submitted a few days later on June 1st. In total, County Materials created detailed drawings for an impressive 190 special structures, including culvert and manhole systems, in just over one week.

After the drawings were approved, County Materials immediately began production. One week later pipe and special structures began to arrive on site. County Materials’ production team was able to meet the tight timeline. In addition, County Materials large delivery fleet and experienced dispatch team eliminated many of the obstacles that can lead to long wait times for alternative materials.

In 2014 the City of Waukesha along with Graef Engineering Firm developed a flood mitigation plan addressing frequent flooding issues throughout the city, including neighborhoods surrounding the northern portion of the bypass. The plan laid out detailed modeling of potential flooding caused by major rain events in the area of the bypass project. The mitigation plan recommended incorporating updated storm water management systems along Meadowbrook Road.

When the decision was made to move forward with the bypass project there was no question about implementing the storm water management updates addressed in the flood mitigation plan at the same time. By the time the project was completed, County Materials manufactured and delivered 14,518 ln. ft. of reinforced concrete pipe ranging from 12” in diameter to 48” comprised of class III, class IV and class V pipe along with 33 manholes, 58 catch basins, and 157 inlets.

In addition to storm sewers, County Materials supplied 1,040 ln. ft. of class III reinforced concrete pipe and 42 apron end walls for ditch-to-ditch applications, which includes under the driveways of several homes and businesses, and two rows, each 176’ ln. ft., of 60” class III reinforced pipe which run under the bypass to handle the flow of water from Fiddlers Creek.

Just north of Summit Ave, a tributary of Pebble Creek runs under Meadowbrook Road through three separate runs of culvert pipe. To make the smallest impact possible on the waterway, the three agencies involved decided it was best to keep the pipe in place and extend their lengths to accommodate the wider road. County Materials supplied 216 ln. ft. of 48” reinforced concrete culvert pipe which makes up two of the runs and 109 ln. ft. of 72” reinforced concrete culvert pipe for the single run. The additional culvert pipe extends to the west another 108 ft., protecting the tributary from erosion. The bottom of these three runs are partially buried to maintain the tributary’s natural streambed, which is vital in keeping natural water flow and for the health of aquatic animals. 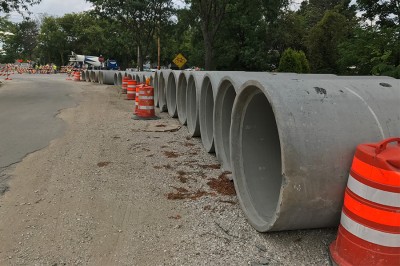 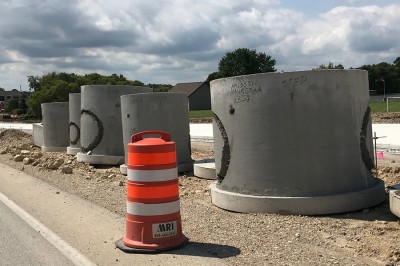 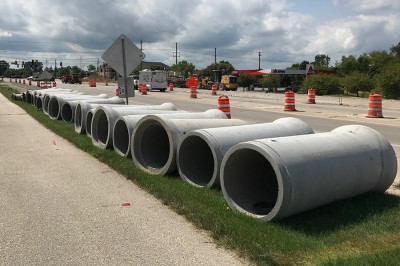