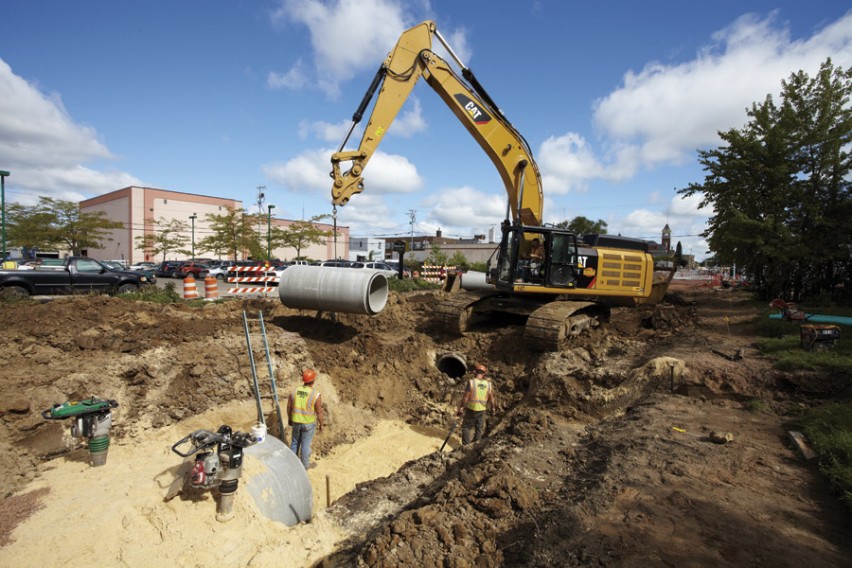 Why the City of Marshfield Chose to Replace Concrete with Concrete

In the spring of 2015, the City of Marshfield, WI began an extensive street reconstruction program in the heart of downtown. The $2.9 million project, awarded to Earth, Inc. of Arpin, Wisconsin, includes pavement, streetscaping and utility improvements to six blocks of Maple Street and adjacent streets between 6th St. and Veteran’s Parkway.

In preparation and design of the project, underground utilities were inspected to assess their condition and need for replacement.  This effort included assessing 3,100 feet of precast concrete storm sewer. The 85-year-old concrete pipe bearing the manufacturer’s stamp “WausaW29” was determined to have been manufactured by Wausau Concrete Co in 1929. That plant is now owned and operated by County Materials Corporation after acquisition in 1986. In spite of its structurally sound and functioning condition, it was decided to remove and replace the existing 1929 storm system with new reinforced concrete pipe (RCP) manufactured by County Materials.

“It was a tough call to replace the pipe,” reports Tim Cassidy PE, Assistant City Engineer for the City of Marshfield. “The condition of the pipe itself was excellent. We ran our camera through it; looking at it internally there were no structural defects. In older pipe the joints are a bit different (than modern pipe) but they weren’t cracked or falling apart.  (The concrete) showed no sign of deterioration due to salts or deicing chemicals.  (The pipe) definitely withstood the test of time.”

In fact, the old concrete pipe sections were in such good shape that efforts have been made to re-use them in other projects. Some of the pieces have already been sold to local property owners for use as culverts.  The City has also considered reusing some of the remaining pipe sections  for other municipal projects as well.

A decision based on sound design principles

Ultimately, the City of Marshfield’s decision to replace the old pipe was based largely on the need to accommodate design changes to the new storm sewer system and other concerns not related to the condition of the concrete pipe. Some of these considerations include:

• Improvements in roadbed depth. The design team was concerned that the original pipe had been installed at a shallower depth than is usual for modern construction. Marshfield’s clay soils, especially, have the potential to cause heaving when pipe is not buried deeply enough. Even though this problem had not come up on Maple Street in the past, there was concern that the thickness of the new, crushed rock subgrade would be reduced where the old, shallow pipe passed under the roadway. Increasing the depth of cover over the storm sewer system assured the full thickness of subgrade under all areas of the new pavement.

• Reinforcement concerns. While the 1929 storm pipe did contain steel reinforcement, it was not as heavy as that used in today’s concrete pipe. This, combined with the shallow depth of the old pipe and the reduced rock base cross-section, created concerns about it being damaged during construction if left in place.

• Planning for maximum longevity. The U.S. Army Corps of Engineers suggests a design life of 70-100 years for precast concrete pipe. At 85 years in service, the old storm sewer pipe was nearing this suggested limit. Many concrete pipes have been documented to remain sound for far longer than 100 years. While these 85 year old pipes would very likely have lasted for at least another 50 years, the City of Marshfield decided to err on the side of caution by replacing them.

Despite the availability of other options, the City of Marshfield never considered anything other than precast concrete pipe for their replacement storm sewer system. Long-term value was a priority for them, and reinforced concrete’s superior durability and structural integrity made it the ideal product for this project. The excellent condition of the existing pipe only served to illustrate the economic advantage of this material when lifecycle performance is taken
into account.

Concrete is the most durable pipe material currently in use. In contrast, the U.S. Army Corps of Engineers suggests the designer should not expect a material service life greater then 50 years for any plastic pipe.  They have also recommended a maximum 50 year service life for aluminum pipe as well as corrugated metal with the use of coatings.  Thus one can expect concrete pipe to last 1 ½ to 2 times longer than alternate materials such as HDPE, PVC, and polypropylene. Precast concrete pipe is also non-flammable, will not rust, tear, buckle, or deflect.

Shortly after the old storm drain was removed, County Materials delivered 3,070 linear feet of new reinforced concrete pipe (RCP) to replace it. The delivery included 716’ of 38”x60” horizontal elliptical pipe and 1290’ of RCP ranging in size from 18” to 36” for the new storm sewer mainline under Maple Street, and 1,064’ of 12” and 15” RCP for the inlet leads.

“We prefer precast,” says Cassidy. “With other pipe options, we could not have put as much road base in. We know that the concrete will hold up and that’s our preferred material for storm sewers.” 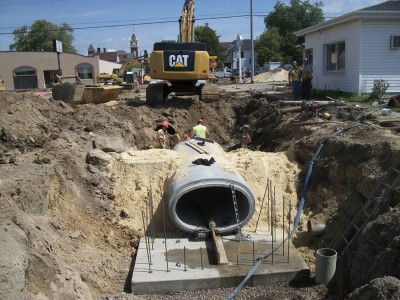 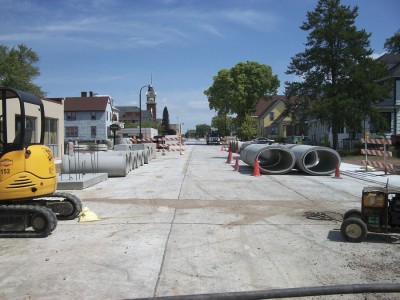 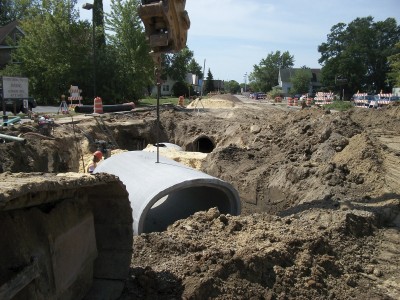 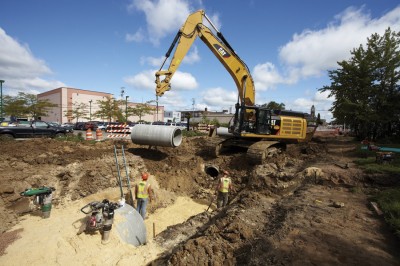