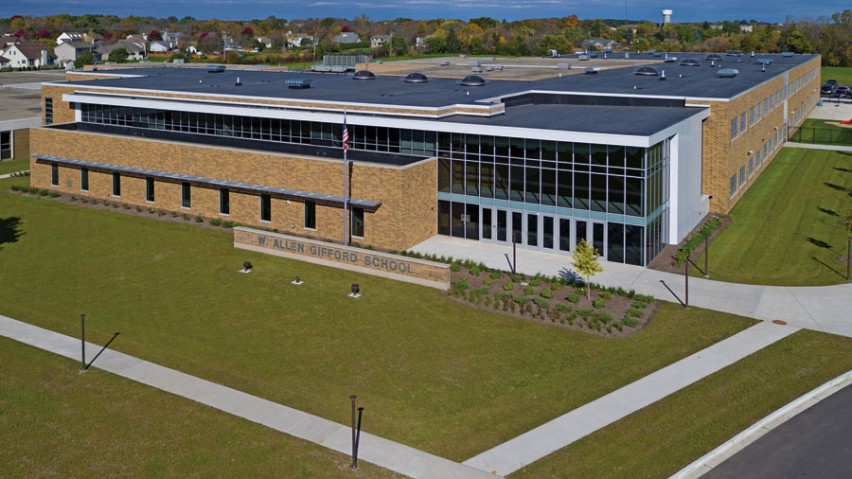 Completing fifth grade at Gifford Elementary in Racine, Wis., meant students would be split up between multiple middle schools in the area. The transition to different schools was difficult for many students and often separated them from friends. Now students can stay together with the completion of a new 79,852 sq. ft. addition to the existing school, which allows for a joint middle and elementary school. In 2014 the Racine Unified School District approved a referendum to build three new schools in the district, including the Gifford Elementary expansion. The original building also faced a major renovation to meet the updated facilities of the expansion.

While unifying the district’s middle schools was a primary goal in the construction of a new building, unifying the new building with the old was a major construction challenge. The project’s architectural firm, Partners In Design, faced difficulties finding a brick that matched the façade of the old building. After reviewing many clay brick options they could not find any that were close enough in color or that were readily available. Partners In Design turned to concrete brick options and quickly found the match they were looking for in County Materials’ Heritage Collection™ Designer Concrete Brick. They chose Tuscany Villa Blend units to complement the color of the existing structure.

Construction on educational facilities typically has a tight timeline; work needs to be completed before students are expected to walk in the doors in the fall. Partners In Design found that many of the clay brick options they were looking at would not have been available to meet the project’s timeline. Concrete brick’s ready availability and rich color blends made it the best solution for the project. Masonry color and texture options have grown exponentially with advancements in the concrete manufacturing industry. The natural color tones in Tuscany Villa Blend, and all Heritage Collection Designer Concrete Brick is achieved through integrating pigments throughout the entire brick.

It took nearly 69,500 concrete brick units to complete the exterior wall. A load-bearing, full-veneer unit was chosen because of their increased resistance to fire, rot, and weather, which are all vital in a school environment. Also, the long service-life and low maintenance requirements made Heritage Collection Designer Concrete Brick the right choice for the school. The larger utility size brick provided a better scale to handle this massive project and gave the crew better production time, which was necessary to meet the tight timeline.

The expansion made room for an additional 700 students and helped bring back some of the nearly 400 students who left the district over the years through open enrollment options at other schools. The seamless integration of the building expansion with the old section stands as a testament to the color richness and the many color options possible with concrete brick. Construction began in late 2015 and was completed in time for students to begin classes in fall 2016. 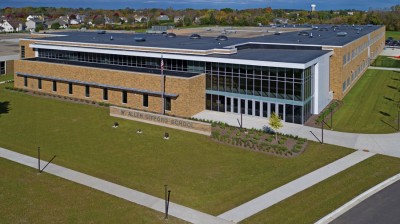 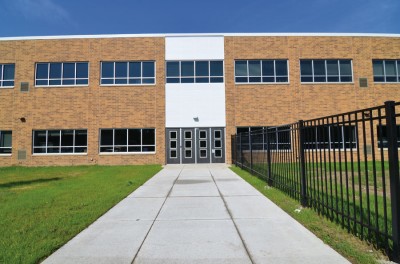